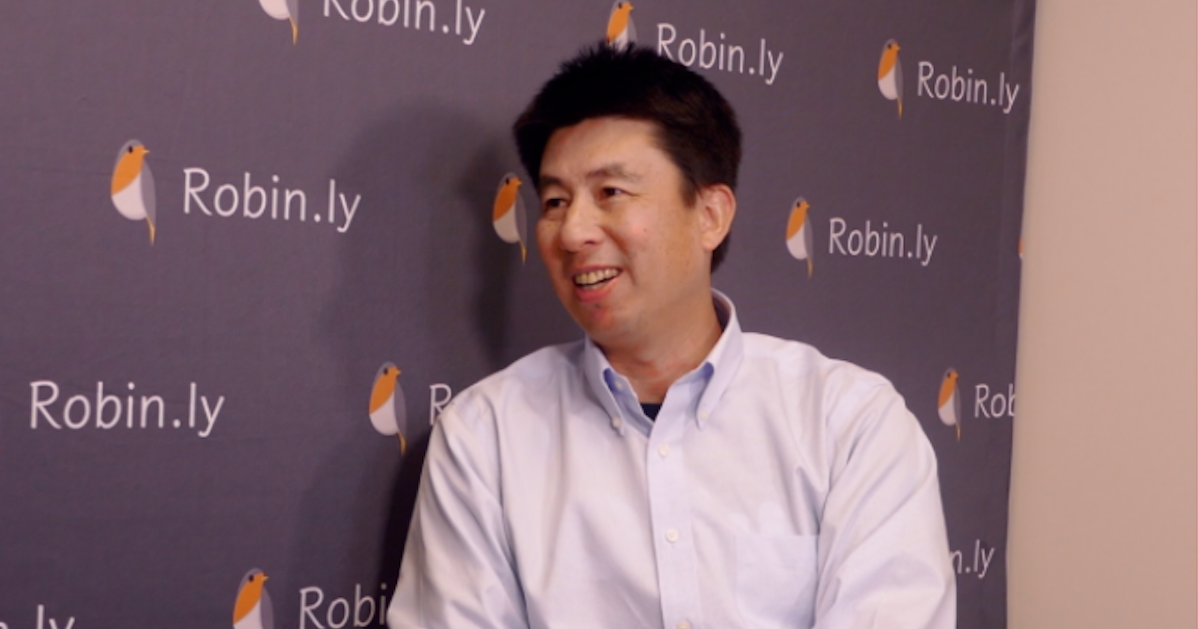 Sam Liang, Founder of Otter.ai. Liang shares his journey to Otter.ai and how he started his startup.

Sam Liang, the CEO and Founder of the voice and speech recognition startup, Otter.ai met with Robin.ly to discuss some of the pressing topics on artificial intelligence applications and his passions as a successful entrepreneur. Sam has been an important figure in the world of tech for some years now, being a prominent team member of Google’s Map Location Service, working with Steve Jobs, and even having one of his previous projects acquired by the e-commerce giant, Alibaba.

His latest endeavor, Otter.ai is a startup which provides natural language processing (NLP) tools to the end user. It can detect who exactly is speaking during a conversion, and additionally allows users to search through previous conversations by using key words and phrases. It is an advanced voice and speech recognition tool designed for business meetings and data logging.

Sam was inspired to enter the startup world when he pursued his PhD at Stanford university. Sam was surrounded by people who were going on to change the face of the tech sphere which helped him to recognize his own passions.

“I was immersed in that environment. You see that other people around you started to do things as big as Yahoo and Google, you started to think: Okay, why can’t I do it someday?”

From then on, he actively chose to begin his endeavor in the startup industry. It wasn’t long before he found himself working with tech giants, such as the likes of Google and Apple. In fact, after hearing about Sam’s impressive work on Google’s Map Location Service, Steve Jobs approached Sam and the team for Apple’s own GPS project.

“Steve Jobs really wanted to have a map service. He actually came to us asking for help, we actually built the service for iPhone first. And he loved it so much, he personally demonstrated the blue dot feature on his iPhone when he was launching it in San Francisco”.

Sam continued to focus on the remit of location services, eventually directing his energy to his own startup, Alohar Mobile. The app improved GPS capabilities by including advanced AI allowing it to make and predict rational decisions for the end user. In 2013 it was acquired by Alibaba. When recalling the experience, Sam expressed his emotions regarding the acquisition.

“The good thing is that you get a little bit safer. It was the support of a large company behind you, you definitely have a lot more security there… My heart is still an entrepreneur. So I want to try something even more audacious, even more ambitious”.

Sam’s more ambitious project goes by the name of Otter.ai. It is a voice and speech recognition service which is significantly enriched by AI. As Sam notes, this is not the same as what Siri or Alexa are doing. Both of those services are aimed at giving the end user some ease and control over their devices, whereas Otter.ai is focused on conferences, business meetings, and particularly the ability to catalogue large streams of communication.

At the heart of the startup is the simple fact that people do not have a satisfactory means of tracking their communication. Valuable data is lost on a daily basis. This is not just business-related information, but also personal and emotional information too.

“What if I can record my whole life, what will happen? Can I search for things I’ve heard in my college years, even in my high school years? What did my mom tell me when I was in high school? When you met your first girlfriend, what did she say? That will be interesting”.

“If you think about human history, how much information is encoded in the voice, but very minimal amount of voice is actually saved”.

The power of voice recognition

The voice recognition feature is deeply important to Sam, as it allows for greater retention of data:

“If you’re only looking at a sentence, if you don’t know who said it, you’re missing a lot of information. Because even if it’s the same sentence, if it’s spoken by Google’s CEO, it may have a different meaning than if spoken by Apple’s CEO”.

Otter.ai is allowing the world to document its conversations in a way which has never been successfully done before. With the power of AI, Sam Liang and his team are providing the end user with the radical ability to keep track of their lives with minimal effort.

As for the next steps, Sam envisions the system to be able to extract the “action items” from business meetings or team stand-ups, producing meaningful meeting summaries for project managers.

Sam Liang’s project has the capability to significantly reinvent the realm of speech and voice recognition. The fact that Otter.ai can perform complex actions such as log and search through conversations means that information can be expressed and analyzed more than ever before. This is an interesting application for AI, as language is one of the most complex inventions in human history. To be able to teach the inner workings of it to a program is a mammoth task, but one which provides many benefits.

To learn more startup stories, check out our collection here.

Sign up with Crossminds.ai to get personalized recommendations of the latest tech research videos!

Thank you! Your submission has been received!
Oops! Something went wrong while submitting the form
Tags:
Business
Startups
Robin.ly

Robin.ly is a content platform dedicated to helping engineers and researchers develop leadership, entrepreneurship, and AI insights to scale their impacts in the new tech era.

Thank you! Your submission has been received!
Oops! Something went wrong while submitting the form
Go Up